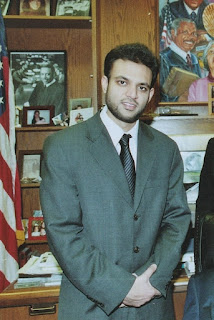 Articles from Times of India, Washington Post and other News agencies with several links follow my comments;

Rashad Hussain is an activist par-excellence from my home town Dallas and is greatly influenced by the Indian ethos of Pluralism and inclusiveness. He would fit right in with President's Obama’s idea of one world, where we respect every nation and their sovereignty.

He will strengthen the pluralistic values of America, and President’s desire to encourage the community of nations to review our values of Liberty, Justice and co-existence as catalysts for prosperity. As a Special envoy to the OIC, Rashad will initiate a positive relationship between America and the Muslim nations, I am proud of his heritage; an Indian, a Muslim and an American.

We have to maintain a healthy balance within our communities and with all nations, what is good for America has got to be good for the world and vice versa to sustain the equilibrium, he is the right man for the job. May God bless him in uplifting America’s role in creating a better world for the good of all.

" Hussain’s appointment delighted Indian-Americans, including one fellow Indian-American who was also in line for the job. ''Rashad is greatly influenced by the Indian ethos of pluralism and inclusiveness. As a Special envoy to the OIC, he will initiate a positive relationship between America and the Muslim nations, I am proud of his heritage; an Indian, Muslim and an American,'' said Mike Ghouse, a Dallas-based inter-faith activist from India who has known the Hussain family and who was also under consideration for the post." Times of India.

President Obama said today he is naming Rashad Hussain as his special envoy to the Organization of the Islamic Conference as part of his effort to build up relationships with the Muslim world.

The announcement came in a video message by Obama to the seventh annual U.S.-Islamic World Forum meeting in the Qatari capital. More on his announcement here.

Some background on the position from AFP:

George W. Bush formally named the first U.S. envoy to the OIC in February 2008, appointing Texas entrepreneur Sada Cumber. The OIC, based in the Saudi city of Jeddah, with its 57 members is the world's largest Islamic assembly."

Some background on Hussain from ABC's story:

A former trial attorney at the Justice Department and clerk to Damon J. Keith on the U.S. Court of Appeals for the Sixth Circuit, Hussain is a devout Muslim and helped inform the speech President Obama gave in Cairo -- particularly with the speech's references to the history of Islam and the Koran, and its general tone.

Rashad Hussain is presently Deputy Associate Counsel to President Obama. His work at the White House focuses on national security, new media, and science and technology issues. Mr. Hussain has also worked with the National Security Staff in pursuing the New Beginning that President Obama outlined in his June 2009 address in Cairo, Egypt.

Mr. Hussain previously served as a Trial Attorney at the U.S. Department of Justice. Earlier in his career, Mr. Hussain was a legislative assistant on the House Judiciary Committee, where he focused on national security-related issues. Mr. Hussain received his J.D. from Yale Law School, where he served as an editor of the Yale Law Journal. Upon graduation, he served as a Law Clerk to Damon J. Keith on the U.S. Court of Appeals.

Mr. Hussain also earned his Master's degrees in Public Administration (Kennedy School of Government) and Arabic and Islamic Studies from Harvard University. He attended college at the University of North Carolina at Chapel Hill.

WASHINGTON: Indian-origin lawyer Rashad Hussain, a hafiz of the holy Quran, will be America's new special envoy to the Organization of Islamic Countries, a post vital to President Barack Obama's bid to repair the US' strained relations with the Islamic world.

A White House lawyer, Hussain was nominated to the key post as he had played an important role in developing partnerships with the Muslim world, Obama said. Hussain is entrusted with deepening and expanding the partnerships with Muslims across the world, an important element of Obama's foreign policy made evident in his speech in Cairo last June.

Hussain, 31, whose parents are naturalised citizens from India and live in Plano, Texas, is presently the Deputy Associate Counsel to the President.

As a 'hafiz' (someone who has memorised the holy Islamic text) of the Qur'an, he is a respected member of the American Muslim community, Obama said about Hussain, announcing his appointment last week as his envoy to the Organisation of Islamic Countries, a 57-nation grouping.

Hussain's work at the US administration focuses on national security, new media, science and technology issues. He has also worked with the National Security Staff as Obama sought to rebuild ties with Muslims worldwide after eight turbulent years of his predecessor George W Bush's tenure.

Links to the story: