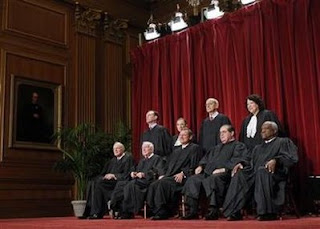 The issse us poweful enough to bring nearly 3/4th of Americans together; from Left to Right, and Rebublicans and Democrats are clapping together. I wish we could carry this sense on War and ravages it brings to us, and every one else. - Mike Ghouse

Left and right united in opposition to controversial SCOTUS decision

Much has been made of late about the hyper-partisan political environment in America. On Tuesday, Sen. Evan Bayh explained his surprising recent decision to leave the senate by lamenting a "dysfunctional" political system riddled with "brain-dead partisanship." It seems you'd be hard-pressed to get Republicans and Democrats inside and outside of Washington to agree on anything these days, that if one party publicly stated its intention to add a "puppies are adorable" declaration to its platform, that the other party would immediately launch a series of anti-puppy advertisements.

But it appears that one issue does unite Americans across the political spectrum.

A new Washington Post-ABC News poll finds that the vast majority of Americans are vehemently opposed to a recent Supreme Court ruling that opens the door for foreign and domestic corporations, labor unions, and other organizations to spend money directly from their general funds to influence campaigns.

As noted by the Post's Dan Eggen, the poll's findings show "remarkably strong agreement" across the board, with roughly 80% of Americans saying that they're against the Court's 5-4 decision. Even more remarkable may be that opposition by Republicans, Democrats, and Independents were all near the same 80% opposition range. Specifically, 85% of Democrats, 81% of Independents, and 76% of Republicans opposed it. In short, "everyone hates" the ruling.

The poll's findings could enhance the possibility of getting a broad range of support behind a movement in Congress to pass legislation that would offset the Court's decision. Of those polled, 72% said they supported congressional action to reverse its effects. Sen. Charles Schumer, who's leading the reform effort in the Senate, told the Post that he hoped to get "strong and quick bi-partisan support" behind a bill that "passes constitutional muster but will still effectively limit the influence of special interests."

The findings of the poll are a bit surprising considering the fact that the case split the Supreme Court, with the five conservative justices in favor and the four more liberal justices against it. The decision was almost universally hailed by Republicans in Washington, who saw it as a victory for the free speech provided for under the Constitution, while President Obama and prominent Democrats in Washington almost universally derided it as a dark day for American democracy.

However, Sen. John McCain, one of the original sponsors of the campaign finance law struck down by Court's decision and one of its few prominent Republican opponents, may have been prophetic when he predicted Americans would turn against the Court. McCain told CBS's "Face the Nation" that there would be a "backlash" once awareness grew about "the amounts of union and corporate money that's going to go into political campaigns."

Perhaps the new poll numbers show that McCain might have been onto something.