Tuesday, February 16, 2010 - Bonnie Kaplan, president of A.W. Perry Museum Society of Carrollton, worked on presenting a Quilt to the City, an inclusive mosaic of what Carrollton represents, of different races, ethnicities, faiths, nationalities and other uniqueness. Mayor Ron Branson, the City Council members, commissioners and citizens attended the event. 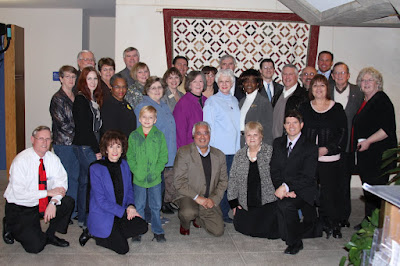 Mike Ghouse was pleased to be a part of the event and the quilt, he was a former Neighborhood Commissioner at the City of Carrollton, it was like home coming.

The quilt is an “Album Quilt” or “Signature Quilt” made up of signatures from individuals, families and groups who signed on blocks and strips of muslin, that were then incorporated into the quilt’s design. Historically, Album Quilts were used to commemorate special occasions or show appreciation. They were even used to raise funds for the needs of soldiers during the Civil War.

The Carrollton Centennial Quilt will be on display at various City facilities through August. Commissioned by the A.W. Perry Homestead Museum Society, the Museum’s support organization, the Centennial Quilt commemorates the Perry home and the community spirit of Carrollton.

Before its official display at the A.W. Perry Homestead 100 Celebration, the Society hosted a Quilt Signing event and had squares available at various times for Carrollton residents to purchase and sign as a type of time capsule honoring the last 100 years. The Perry home’s Centennial Quilt links the past, present and future of the City of Carrollton. The diversity represented in the names that appear link the community together with each and every stitch. Signers ranged in age from 8 to 93.

The Quilt stitches together Carrollton's rich history and vibrant future with signatures incorporated from descendants of some of its earliest settlers as well as some of its newest citizens. The funds raised by the Society were then put to use to support the Museum and its programs.

The Quilt is currently on display at City Hall (1945 E. Jackson Road), where it will remain through Monday, March 1. At that time, the Quilt will move to the Josey Ranch Lake Library.

The A.W. Perry Museum Society was formed in 2008 by a group of caring citizens interested in preserving the history of Carrollton and the Perry Homestead. The Perry Society received a grant from the Civic League to help fund the project. Fabrication of the quilt was completed by Melba Hamrick of the Old Craft Store located downtown Carrollton.

Visit http://www.theperrysociety.org/ to learn how you can be a part of the Museum support group.

Built in 1909, the home has served as the A. W. Perry Homestead Museum since 1976 and received state historic landmark status in 1977. The Museum is open to the public and offers a glimpse of what Carrollton was like 100 years ago. Visit www.cityofcarrollton.com/museum for more information.
Members of the A.W. Perry Homestead Museum Society, the Civic League, and the Carrollton City Council posed in front of the completed quilt.
Posted by Mike Ghouse at 11:56 AM