Obama the all rounder and Urdu 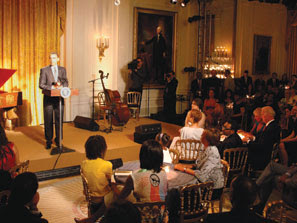 Obama is an all rounder and a Pluralist. He has refrenced all faiths in his talks, and now this is another beautiful part of him. If you recall some of the earlier Presidents and the men and women from the Moore times, they were scientists, mathematicians, poets, philosophers, ambassadors, and doctors all roled in to one. Obama is the one.

Urdu and or Hindi is perhaps the only language in the world with three scripts - Roman, Persian (urdu) and Sanskrit (hindi) and I am blessed to be familiar with all of them. - Mike Ghouse

If you want to make high-brow small talk at one of President Barack Obama’s cocktail parties, don’t bother brushing up your Shakespeare. Try reading Urdu poetry.

As POLITICO’s Ben Smith points out in his blog, Obama showed off his intellectual flair by evoking a standard of Pakistani culture in a recent interview with Dawn, a popular English-language newspaper in Pakistan.

“‘I would love to visit. As you know, I had Pakistani roommates in college who were very close friends of mine. I went to visit them when I was still in college; was in Karachi and went to Hyderabad. Their mothers taught me to cook,’ said Mr Obama.

‘What can you cook?’

‘Oh, keema ... daal ... You name it, I can cook it. And so I have a great affinity for Pakistani culture and the great Urdu poets.’

‘Absolutely. So my hope is that I’m going to have an opportunity at some point to visit Pakistan,’ said Mr Obama.”

It may sound somewhat esoteric, but this ancient form of mystical and oft-times philosophical love poetry has been popular in Pakistan and parts of India for centuries. And there are a few things to know before you try to impress the poetry-lover-in-chief.

One of the most popular poets was Mirza Ghalib, whose work dates from the mid-19th century. The still-popular art form usually features the story of a lover scorned by his beloved. And there is almost never a happy ending. “Often the beloved is often a total witch,” says Gwen Kirk, a University of Texas master’s candidate in the subject of Urdu poetry. “She breaks the lover’s heart all the time; she neglects him. It’s all about the process of trying to get closer to the beloved, and it’s got a lot of Sufi and mystical elements as well.”

The ghazal is the most common form of Urdu poetry, and, like sonnets, it follows strict rules of form: four to 12 couplets with a meter and rhyme scheme. But the similarities end there. Couplets in an Urdu poem can sometimes be completely unrelated to each other, each delving into themes that range from unrequited love to the meaning of life.

Fear not if your Urdu — one of two official languages in Pakistan — is a little rusty. Obama likely reads one of the many translated compilations of the texts, according to Kirk. Or if he is a truly savvy Urdu poetry enthusiast, he may choose to listen to the poems recited or sung, as it is commonly performed in the region.

Obama’s admission that he shares an affinity with the “great Urdu poets” may get him further in the region than most think. The language and poetry are commonly associated with Pakistan’s and India’s Muslim population, according to Kirk, and it remains intensely popular in the region — poetry recitals sometimes attract gatherings of thousands of people.

“It does show a willingness to understand that part of the world,” says Kirk.

And in general, it gives Obama further credibility as a supporter of the arts. Not only is he one of three American presidents to have poetry read at their Inaugurations, but he reads the stuff, too!

Want to dig into Urdu poetry? Here’s an example of what awaits you: