Time for a Common Vision?

.
Islamists and the West: Time for a Common Vision? 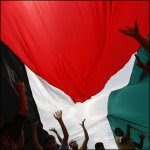 If you are a moderate Israeli or Palestinian, Jew or a Muslim, you will find value in this piece by Ahmed Yousef.

The real enemies of Peace in the Middle East are the right wingers on both sides of the issue. They are the ones who believe in annihilation of the other to achieve peace, dialogue is not part of their brain system. Sadly, we the Americans are duped by our media to see only one point of view without questioning it, some of us have lost to see another point of view at all.

The right wingers on either side of the issue may not like this piece as they may never had an opportunity to extricate themselves from the massive doses of propaganda they may have inhaled.

The goal should be peace – Hope for Palestinians to live a normal human life and Security for Israelis who can live a normal daily life.

i) “The Palestinian cause lives in the hearts and minds of 1.5 billion Muslims spread over five continents. It is the pivotal factor in matters of war, peace, as well as other complex problems in the Middle East. Thus, a just resolution of the Palestinian case is vital for achieving stability, security, and prosperity in what is called the Middle East arc of crisis.” Indeed, this issue is the epicenter of a whole lot of problems, the Muslims have been talking about it, writing about it, but American Media had no inclination to pick on this.

ii) “Thus Hamas (both as a movement and as a government) fell victim to the misguided policies of the George W. Bush administration not only toward the Palestinian people and their national cause but also toward the peoples of the Arab and Islamic regions more broadly." And I would add, toward the people of Israel. The Neocons have done more harm to Israel's security than Hamas could ever dream of.

While Hamas Charter calls for annihilation of Israel, the Israeli leaders have called for the elimination of the Palestinians, both are wrong and both really don’t mean it, but use it to dig in their heels and literally impose their thoughts on to the common Israelis and Palestinians.

Mike Ghouse is a Speaker, Thinker and a Writer. He is a frequent guest on talk radio and local television network discussing Pluralism, Terrorism, India, Islam, Peace and civic issues. His comments, news analysis and columns can be found on the Websites and several Blogs listed on his personal website http://www.mikeghouse.net/
#
Posted by Mike Ghouse at 5:16 AM