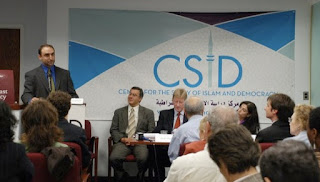 The Center for the Study of Islam and Democracy (CSID) and the Project on Middle East Democracy (POMED) co-hosted a panel discussion on Thursday, June 4, 2009 entitled "Analyzing Obama's Speech to the Muslim World." The panelists were Geneive Abdo of The Century Foundation, Richard Eisendorf of Freedom House and Will Marshall, of the Progressive Policy Institute. Radwan Masmoudi, President of CSID, moderated the panel.

Masmoudi expressed his apprehension that President Obama would not prominently feature democracy and human rights in his speech. He was pleasantly surprised, however, that democracy was among the speech's main themes. He noted that after twenty years of deterioration of US-Muslim relations due to mistrust, misunderstandings and a lack of information and knowledge on both sides, President Obama's speech set a new course. And while Obama's speech opened hearts and minds in the Muslim world, Masmoudi warned that people in the region would expect concrete, policy-based follow up to his words.

Marshall labeled the speech as "masterful;" noting Obama' unique ability to delicately address complicated issues while simultaneously providing clear solutions in his speeches. As a corollary, he contrasted Bush's use of the imperative voice in communicating with the Muslim world with Obama's deft tone imbued with honesty and respect. He argued that this approach had a disarming effect to those who are inherently distrustful of the United States and burdens its detractors to justify their clichéd beliefs.

While his overall assessment was positive, Marshall insisted on including three caveats to his praise. First, he worried that Obama's message of reconciliation conceded too much to the al-Qaeda narrative of victimization. Marshall argued that it was not Obama's role to reinforce Muslim feelings of identity politics; rather, it was his duty to debunk them. Second, he noted that the historical animosity between the US and the Muslim world would not change in one speech. He argued that Obama spoke to a tough-minded audience and that radicalism and extremism would not bend to rhetorical sweet-talking. In this vein insisted that values should guide US policy and that America should reap the consequences of such an endeavor. Third, he argued that for Obama's efforts to be seen as a departure from Bush-era policies ignores the real problem of fifty years of America's short-minded policies of allying with expedient allies against Communism and radical Islamism. This track record only reinforced his belief that the United States must align with ordinary people's aspirations against their governments and not step back from promoting democracy.

Geneive Abdo characterized Obama's approach as "evasive" and devoid of any real policy prescriptions. And while he addressed buzzwords such as colonialism and occupation, she argued Obama's approach was not nearly expansive enough. She continued by noting how Obama's rhetorical brilliance raised expectation so high that Iran and al-Qaeda had preemptively issued statements responding to his speech. She continued by critiquing Obama's use of extremism as a foil in his speech. She argued that the debate was already well beyond this dichotomy and that Obama should have used his speech to address the political, economic and social reasons for extremism's regional constituency.

She also noted the originality of using the affluence and freedom of America's Muslim community as an argument in the US's favor. She did not think this argument would be particularly persuasive given the divergence of circumstances among Muslims in the United States and the Middle East. On the War in Iraq, Abdo criticized the president for not apologizing for the invasion and not offering concrete plans for the country. She did admit, however, that he at least repudiated the Bush notion that Iraq was a war of necessity and not one of choice. Abdo also believed that Obama criticized the Palestinians far more than the Israelis in his speech, but did note how the president's tough rhetoric revealed a burgeoning rift between the US and Israel. In summation, she graded the presentation of his remarks highly but felt the substance of the speech was mediocre and that the conflict between the two sides was rooted in policy and not a lack of respect.

Richard Eisendorf noted the choice of Cairo as the venue for the speech as the center of the Arab world and that the diversity of the crowd represented the full breadth of Egyptian public opinion. He then pointed to the loud applause during sections on democracy and human rights as evidence the crowd was not full of Mubarak loyalists. Acknowledging the concerns of his fellow panelists, he asserted that while policy follow up to the speech will be the most important element of his outreach to the Muslim world, the speech did leave a very strong feeling of respect in the way the United States under Obama intends to reach out to the Muslim world. He also pointed to the three D's the administration has heretofore considered the cornerstones of its foreign policy: diplomacy, development and defense. He argued that in the president's speech he appeared to add the fourth 'D' of democracy to the fold.

Eisendorf also highlighted the shift Obama intended to make from Bush policies and how that would affect public opinion in the region. He specifically mentioned the straightforward manner in which Obama addressed the Israeli/Palestinian conflict. He also noted the significance of the president's use of the word 'Palestine' and other key buzzwords. In addition, he believed many in the region would find his rhetoric on this issue insufficient. As a final point, Eisendorf felt Obama finally established his doctrine of 'quiet diplomacy based on mutual respect.'

In his summary statement, Masmoudi noted that while the tone of the speech was largely positive, it only represented the beginning of the administration's engagement with the Muslim world and that implementing the ideas of the speech would be a tremendous challenge. Meeting this challenge, he said, would require the concerted effort both by the domestic American reform constituency as well as positive steps by the Muslim world.
.
Posted by Mike Ghouse at 7:51 PM