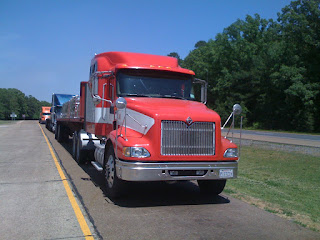 I drove a distance of 875 Miles from Louisville, my wife's hometown to Dallas, my home town in 14 hours, on the way; there was so much amusement to share. It feels good to be on the road, there’s so much good out there. Our Tax dollars are working well to make America, the beautiful....

I sincerely hope, as Americans we cut out all funding of foreign military aid, instead spend that money on health and education of their people. Help them help themselves in doing well and not to be at each other's throats. Republicans, wake up, it is not a charity, it is an investment in creating a consumer market for our goods (thank God, it is called goods).

7. Except a short distance in Tennessee, the entire stretch was flat, flat as my belly (desired one).

3. I played the old rock and roll music from India, Elvis, Little Ritchie, BeeGees, Michael Jackson and a few others. Shaking the body to rock and roll keeps you awake and active.

1. One out of four Trucks (18 Wheelers) is Red in color, nearly half of the trucks are white in color, the other colors were Green, Purple, Yellow, Blue, Orange, Magenta (there was one). I started counting them from Nashville to Memphis and random sampled again from Little Rock to Texarkana. Of the 100 count, 26 were Red. While driving, I took several pictures, but posted a few. There is always that ubiquitous Red.

2. One out of 4 trucks were Volvo, I was puzzled to see many Volvos, the others visible ones were Mack and International.

5. There is an incredible amount of farm land in that stretch. I was wondering, if all the industries were to collapse, oil gets dried up… we can still produce enough food for all and live a comfortable agrarian life. No TV, No nothing, just basic beautiful life.

7. The roads are incredibly smooth except my own state; Texas.

8. Incredible Fog could not see beyond 100 yards, yet the nuts were driving over 80.

9. The shoulders were cut and clean.

If you have not driven, please make that pilgrimmage.... our road system is simply incredbile. Indeed, it is our Road system that turned as around, gave us mobility, broke the regional barriers and flourished the commerce. May President Eisenhowers's soul be blessed for his initiative.
Posted by Mike Ghouse at 8:58 PM