As long as we are blindly loyal to our President; even when we know he is wrong and his policies are failing, we keep losing the public trust in us. Why should the public trust us, the Republicans?

We should not be counting on Limbaugh, O’Reilly, Beck and their ilk for egging on and re-affirming our President’s wrong policies. They feast on mayhem and destruction and come alive when such events happen. Ultimately, you and I are responsible for our acts and our support for the wrong things we are doing. We have to answer our conscience. Killing and destruction is simply not justifiable.

I appeal to my Republican friends to take a principled stand and tell the President he is wrong, have the guts to speak the truth, it will turn things around. Are there any congressman and Senator who would dare this? He or she will be my hero, an American Hero and hero of democracy. The Republicans will save America and it's stature, if they speak up, if not they should be responsible for letting us fall.

Dick Armey wrote a year ago to wake up, it is time we do that. If not the public will bulldoze our party – as they did during the November 2006 elections. Mr. Cheney and Mr. Bush
http://mikeghouseforamerica.blogspot.com/2007/03/republicans-paid-price-for-neglect.html

President Carter is speaking out, he cares about our nation and I am proud of him for speaking out; speaking out is the essence of our democracy and freedom. We cannot be blind to his call. Let our party loyalty not blind us. Let’s wake up and do the right thing. For speaking the truth, and you the congressperson or the Senator, our president will not throw you out, if you don’t the public will throw you out of your seat for your gutlessness and willingness to do the wrong thing. November 2008 is not far.

Mike Ghouse is a Speaker, Thinker, Writer and a Moderator. He is president of the Foundation for Pluralism and is a frequent guest on talk radio, discussing interfaith, political and civic issues. He founded the World Muslim Congress with a simple theme: "good for Muslims and good for the world." His personal Website is http://www.mikeghouse.net/ and his articles can be found on the Websites mentioned above and in his blogs: http://mikeghouseforamerica.blogspot.com/ and http://mikeghouse.sulekha.com/ . He can be reached at MikeGhouse@gmail.com. Mike lives in Carrollton with his family and has been a Dallasite since 1980. 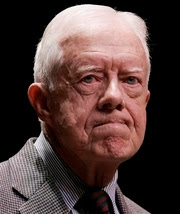 The criticism from Carter, which a biographer says is unprecedented for the 39th president, also took aim at Bush's environmental policies and the administration's "quite disturbing" faith-based initiative funding.

"I think as far as the adverse impact on the nation around the world, this administration has been the worst in history," Carter told the Arkansas Democrat-Gazette in a story that appeared in the newspaper's Saturday editions. "The overt reversal of America's basic values as expressed by previous administrations, including those of George H.W. Bush and

Ronald Reagan and Richard Nixon and others, has been the most disturbing to me."

Carter spokeswoman Deanna Congileo confirmed his comments to The Associated Press on Saturday and declined to elaborate. He spoke while promoting his new audiobook series, "Sunday Mornings in Plains," a collection of weekly Bible lessons from his hometown of Plains, Ga.

Republican National Committee spokeswoman. She said it was hard to take Carter seriously because he also "challenged Ronald Reagan's strategy for the Cold War."

Carter came down hard on the Iraq war.

"We now have endorsed the concept of pre-emptive war where we go to war with another nation militarily, even though our own security is not directly threatened, if we want to change the regime there or if we fear that some time in the future our security might be endangered," he said. "But that's been a radical departure from all previous administration policies."

Carter, who won a Nobel Peace Prize in 2002, criticized Bush for having "zero peace talks" in

Israel. Carter also said the administration "abandoned or directly refuted" every negotiated nuclear arms agreement, as well as environmental efforts by other presidents.

"The policy from the White House has been to allocate funds to religious institutions, even those that channel those funds exclusively to their own particular group of believers in a particular religion," Carter said. "As a traditional Baptist, I've always believed in separation of church and state and honored that premise when I was president, and so have all other presidents, I might say, except this one."

"This is the most forceful denunciation President Carter has ever made about an American president," Brinkley said. "When you call somebody the worst president, that's volatile. Those are fighting words."

"And I think the almost undeviating support by Great Britain for the ill-advised policies of President Bush in Iraq have been a major tragedy for the world," Carter told British Broadcasting Corp. radio.
Posted by Mike Ghouse at 4:12 PM

Email ThisBlogThis!Share to TwitterShare to FacebookShare to Pinterest
Labels: Republicans