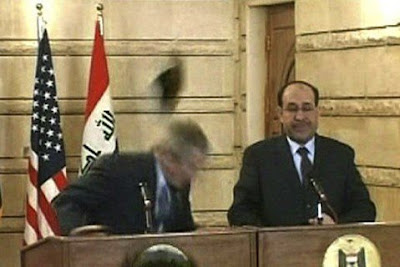 As an American I am offended by the disgusting act of the Iraqi Journalist Muntadar al Zaidi who threw his shoes at my President. Yes, Mr. Bush is my President, not his.

Each one of us hankers for Justice, and as an American I want to see this from an Iraqi point of view. I hope we can see this with all our humility to understand his action.

To Muntadar al Zaidi, Mr. Bush was not his president but some one who has ruined his country.

The man sees destruction all around, shattered civic services, joblessness, homelessness, civil strife and hopelessness, and the one who caused it all tells him in his face that he was the liberator. He probably expressed the sentiments of many Iraqi's, perhaps many a people around the globe in uncivil terms.

Those who have lost their jobs and their homes here in America may have similar feelings, but they would not express it in the same manner. Our expressions are not superior or inferior but different.

Muntadar al Zaidi sees Bush as some one who lied to his own people; the Americans, just as Saddam had lied to the Iraqis.

In his mind, he holds Bush responsible for thousands of women on the street, whose only source of living is selling their flesh for sustenance; this man who threw his shoes may have witnessed the humility of such women who lost their husbands, fathers, brothers or cousins who took care of them.

The Shia’s were suppressed by Saddam, but they probably would not have seen this much bloodshed between them and the Sunnis without our wedges. Bush is some one who ruined every thing they had. Without heavy security Bush probably would meet the same treatment in UK, France, Germany and other nations.

Can people express their disgust in a civil way? Yes, they can, but they probably would retort "Can Bush Admin behave in a civil way? His animosity towards Saddam cost their nation dearly. Would Saddam have killed 4,000 Iraqis as Bush has sacrificed Americans?

Contrary to the words of Mr. Bush, the World loves Americans and not their administration, just as Americans did not hate Iraqis, but hated Saddam.

I respectfully ask our President to stay home or go to his ranch and let his time run out. It is time for him to leave the world alone.


Mike Ghouse is a frequent guest on talk radio and local television network discussing Pluralism, interfaith, Islam, India, Multiculturism, Terrorism, Peace, Politics and Civic issues. His comments, news analysis and columns can be found on the Websites and Blogs listed at his personal website www.MikeGhouse.net. Mike is a Dallasite for nearly three decades and Carrollton is his home town, he can be reached at MikeGhouse@aol.com
Posted by Mike Ghouse at 7:33 PM