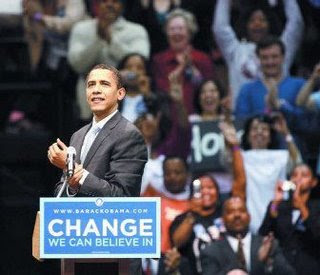 
For the first time in our history, we have a candidate who is representing you, me and every American; he is an all inclusive candidate.

“as the son of an immigrant, his experience can affirm that the American dream is still intact for everyone, regardless of where one's parents were born. His dedication to his family, strong work ethic, opposition to the war in Iraq and deep faith are all qualities that are important to Latino voters." Indeed, he represents the hopes of every American; born, naturalized, white, Black, brown or yellow, Atheist, Bahai, Buddhist, Christian, Hindu, Jain, Jewish, Muslim, Native Indian, Sikh, Shinto, Wicca, Zoroastrian and every American. Obama has become a powerful symbol of pluralism and inclusiveness.

Join us between 4 and 6 PM on Sunday, March 2 at Barbeque tonite, in Carrollton at the SE Corner of Old Denton and Trinity Mills (Bush Frwy or I-90). Be a part of the change to put American on the path of peace, progress and co-existence.