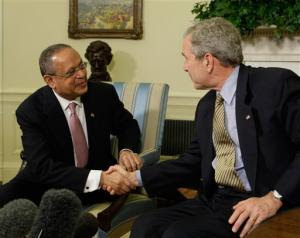 Congratulations to Mr. Sada Cumber for his appointment as a special envoy to the Organization of Islamic Countries. Thanks to Jason Embry for writing such a fine piece (appended below).

Indeed, I was gunning for that position and had sent a note to the state department about it. I am pleased to see Mr. Sada Cumber has been appointed. He is he right guy. At least in his last days, the President has done some thing right, it is a good decision and Sada will deliver results. When Barak takes over the office, Sada certainly can change the false perception that the same President had manufactured "they hate us" without any substantiation and no Journalist ever asking him to prove.

Our country needs a person who can unite the nation together, and bring the people from every race, ethnicity, nationality, culture and faiths together to rededicate our pledge in one nation under God with liberty and Justice.

One nation is a concept where we learn to accept and respect the God given uniqueness of each one of the 301 Million of us, then conflicts fade and solutions emerge. Barak will be a catalyst to realize the American vision of one nation under God.

WASHINGTON — President Bush, acknowledging that the U.S. needs to burnish its image in the Islamic world, named a Texas entrepreneur as liaison to The Organization of the Islamic Conference.
Sada Cumber, who is a Muslim by faith, is the first U.S. special envoy to the intergovernmental organization, which represents more than 50 Islamic states and promotes Muslim solidarity in social and political affairs.

(enlarge photo)
President Bush meets with Sada Cumber, left, the first U.S. envoy to the Organization of the Islamic Conference, Wednesday, Feb. 27, 2008, in the Oval Office of the White House in Washington. (AP Photo/Ron Edmonds)
Bush said the United States is misunderstood and that Cumber's mission is to explain to the Islamic world that America "is a friend of freedom" and that the United States values the freedom of religion.
"Now, a lot of people love America, don't get me wrong," Bush said in the Oval Office where he met with Cumber. "After all, there's a lot of people trying to come here because of what we stand for. But we've got work to do in certain areas."
Creating a U.S. envoy to the group comes as the protracted war in Iraq has fanned anti-American sentiment across the Muslim world. The OIC, which has 57 members, was created in 1969 in response to an arson attack on the al-Aqsa mosque in Jerusalem.
Bush's new envoy has founded six companies in the past 25 years and currently is chairman of SozoTek Inc., a global imaging technology company in Austin.
Before founding SozoTek, he was chairman of Psionic Technologies Inc., an Internet security software company acquired by Cisco Systems in 2002. In 1995, he co-founded Applied Science Fiction, a company specializing in a digital dry film process whose technologies were recently acquired by Kodak. He previously owned Triumph Flexo Industries, which was acquired by American Greetings in 1994.
Cumber also serves as the chairman of TCMS-LLC, an intellectual property development company, and he is a principal in Texas Global-LLP, a partnership that manages the strategic intersection between business, government and public affairs.
___
February 27, 2008 - 2:50 p.m. CST
Copyright 2008, The Associated Press. The information contained in the AP Online news report may not be published, broadcast or redistributed without the prior written authority of The Associated Press.

President Bush meets with Sada Cumber, left, the first U.S. envoy to the Organization of the Islamic Conference, Wednesday, Feb. 27, 2008, in the Oval Office of the White House in Washington. (AP Photo/Ron Edmonds)
Posted by Mike Ghouse at 11:45 AM