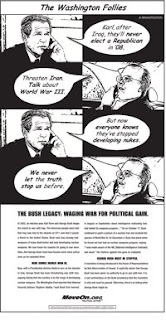 I am not a democract and have always found in tune with the Republican ideals- Less government, more freedom to individuals, fiscal responsibility and talk sense. Well, that idea of what the party stood for died years ago with President Reagan, Senior Bush was alright though.

One of Texas's past democratic senators had argued " It is easy to charge on the credit card and spend bullishly". Who is going to pay the card?

Now, listen to every Republican candidate. All they talk is bomb, bomb and bomb. I don't relate with these war mongers any more.

The chaotic troika draws their entertaiment by keep every one on the edge. Do they talk about Peace? Nope's.

John McCain said bomb, bomb. He shoud be ashamed of himself for making those mistakes again, again and again, based on manufactured intelligence. Some one pays these guys to keep the chaos going, war going, as some one is getting rich to do this. They have to bark, if they stopped, it feels odd to them.

God bless America, and lets hope these war mongers don't make it in November 2008. American public will dump them.

By the way, I am still sticking around as a Republican, a moderate one. People think it is a joke, but I know there are plenty of good for nothing Republicans out there, who are moderate and are afraid to speak up.

How did President Bush respond to the bombshell last week that Iran had stopped its nuclear program? Here's how one of his top military commanders put it: "There has been no course correction."1

For years, Bush and Cheney and Rove have governed using fear—talking up war and terrorism to win elections and push their agenda. They used this method to get us into the war in Iraq, and now the President's at it again—trying to rally support by marching the nation toward war with Iran.

Someone's got to call him out. Our ad team has come up with a unique twist on the issue. We want to run this as a full-page ad in The New York Times. Can you help out with $25 to help run the ad? We think you'll like it—take a look.

We need to expose not just the President's lies but his political motivations behind them. To do that, we need the media to be asking tough questions. Running this ad now can force those answers to be made public.

Consider this: Days after the White House's National Intelligence Estimate (NIE) reported that Iran stopped developing nuclear weapons years ago, President Bush and his proxies are still out stumping for war.

Defense Secretary Robert Gates said that "Iran seeks to create chaos" everywhere they go.2 And leading neocon and Giuliani adviser Norman Podheretz, has even accused the intelligence community of lying in its report.3

It's an old political trick, and one that got us mired in the war in Iraq. Back in 2002, Karl Rove advised Republican candidates to use the fear of war to win their campaigns.4 And right-wing commentators openly brag about how Bush used the war to win the election in '04.5


This time, the report's revelations about Iran's lack of nuclear weapons give us just the opening we need to expose their lies and force the media to question the motivation behind their march to war. This is just the ad to do it. Can you chip in to make sure that this story gets told?

Thanks for all you do,

Support our member-driven organization: MoveOn.org Political Action is entirely funded by our 3.2 million members. We have no corporate contributors, no foundation grants, no money from unions. Our tiny staff ensures that small contributions go a long way. If you'd like to support our work, you can give now at:

Email ThisBlogThis!Share to TwitterShare to FacebookShare to Pinterest
Labels: Republicans