Republicans are waking up 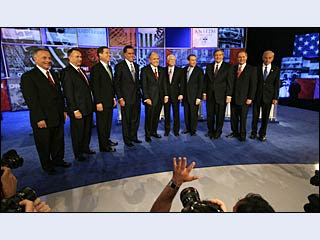 I am pleased to see the responses from the Republican Presidential hopefuls, thanks God they are waking up. I hope, with that awakening, they will show that they do have the guts to speak up.

Speaking up when some one is wrong is the most patriotic thing one can do, instead of letting our nation get the stains, let's fix ourselves. The essence of democracy is checks and balances and that comes with our loyalty in the following order: America, Democracy and Republican Party.

"I would certainly not send him to the United Nations" to represent the United States, said Tommy Thompson, the former Wisconsin governor and one-time member of Bush's Cabinet, midway through a spirited campaign debate.

Arizona Sen. John McCain criticized the administration for its handling of the Iraq War, and former Massachusetts Gov. Mitt Romney said, "I think we were underprepared and underplanned for what came after we knocked down Saddam Hussein ."

Rep. Duncan Hunter of California said the current administration "has the slows" when it comes to building a security fence along the border with Mexico.

The criticism of Bush was more in keeping of the type of rhetoric that could be expected when Democratic presidential contenders debate.

Its prominence at the GOP event - while Bush was traveling overseas - was a reflection of his poor poll ratings and the need of even members of his own party to campaign on platforms of change.

The Republicans sprinkled the criticism of Bush throughout a two-hour debate that ranged over topics from war to immigration legislation pending in Congress to religion. The debate was the third of the accelerated primary campaign.

None of the 10 men on the debate stage raised their hand in agreement when moderator Wolf Blitzer of CNN asked if anyone favored allowing gays to serve openly in the military.

Sen. Sam Brownback of Kansas and Hunter both said they would pardon Vice President Dick Cheney's former aide Lewis I. "Scooter" Libby, sentenced to 30 months in prison earlier in the day for lying and obstructing a CIA leak investigation.

Former New York Mayor Rudy Giuliani, a former prosecutor, said the sentence was excessive, which "argues in favor of a pardon."

Giuliani had the central role in an unscripted moment of humor.

Asked about a Rhode Island Catholic bishop who criticized him for supporting abortion rights, Giuliani began to respond when a lightning strike briefly interfered with the debate hall sound system.

"Look, for someone who went to parochial schools all his life, this is a very frightening thing that's happening right now," he said to laughter.

The debate drew the announced Republican presidential contenders _ but not former Sen. Fred Thompson of Tennessee, an actor apparently poised to join the race in a month's time.

"My name is Thompson. I'm the candidate, not the actor," said Tommy Thompson in a jab at the man who wasn't there.

Fred Thompson, appearing on Fox News after the debate, said he had watched part of the give-and-take among his potential rivals. "They did all right from what I saw," he said.

Much of the debate focused on Iraq.

McCain and Brownback both admitted they voted to authorize the U.S. military invasion of Iraq without reading the formal, nearly 90-page National Intelligence Estimate in advance.

The confession drew a jab from former Gov. Jim Gilmore of Virginia. Members of Congress "ought to read at least that kind of material," he said.

Hunter said he had, the only member of Congress on the debate stage to make the claim.

Both McCain and Brownback said they had received numerous briefings on the situation in Iraq before they cast their votes in 2002.

National intelligence estimates are compilations of the best thinking of U.S. intelligence agencies, meant to provide the broadest guidance to government policymakers.

But they can be wrong. A 2002 assessment, for example, concluded that Iraq had continued its development of weapons of mass destruction, held arsenals of chemical and biological weapons and "probably will have a nuclear weapon during this decade."

McCain drew loud applause from the partisan debate audience when he turned a question about the war in Iraq into criticism of the leading Democratic presidential hopeful, Sen. Hillary Rodham Clinton of New York.

The criticism of Clinton and the Democrats was standard campaign fare for Republican candidates, and as they have before, the GOP hopefuls lavished praise on the late Ronald Reagan.

McCain has long criticized Bush for fumbling the aftermath of Saddam's fall, and Romney has recently begun to make some of the same criticisms.

Former Arkansas Gov. Mike Huckabee added his voice to those criticizing the war effort. He added that the Bush administration "lost credibility" with its response to Hurricane Katrina in 2005.

Thompson's answer was the most startling, coming from a man who had once served in the president's Cabinet as secretary of the Department of Health and Human Services.

Bush's decision to invade Iraq caused hard feelings with longtime allies in Europe, and elsewhere around the world.

Bush's support for the pending immigration legislation is the source of Tancredo's criticism, and the issue figured prominently in the debate.

McCain, alone among the contenders on the St. Anselm College debate stage, supports the measure, and he sought to fend off criticism from some of his rivals.

"We cannot have 12 million people washing around America illegally, my friends," he said.

But Giuliani said the legislation was flawed, "a typical Washington mess." 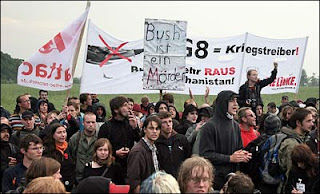 As protesters rally against President Bush during his visit to Europe, members of his own party are giving him a similar treatment at home. On Tuesday, Republican presidential candidates took turns at a debate criticizing the president. Just one example: "The president ran as a conservative and governed as a liberal," said Rep. Tom Tancredo of Colorado. And though he still has prominent support for some of his policies, Bush faces a very tough political environment. What's your outlook for Bush? And how does he compare to some who want his job? More Coverage: The G-8 Summit