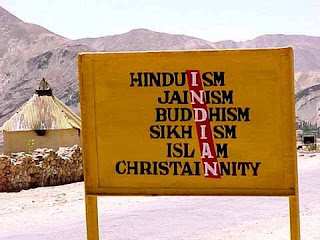 I will re-design the board to include Zoroastrianism, Judaism and Baha'i faiths...or any one can do that. The Bharati Magazine that comes out of India Association in Dallas, had this board as their cover page last month, it was nice, but it was simply an oversight.

The Joint secretary of India Association, Mr. Sury Thiagarajan was pleased and showed that to me, and he had a reason be pleased, a proud step to be inclusive. However, I instantly noticed the missing Zoroastrian symble and then the Jewish and Bahai symbols as well.

Three days from Sury's pointing out, was the Workshop on Zoroastrianism in Dallas and I had mentioned to him that I will re-work it. He was happier, as he always has been an inclusive person.

Let's find where this board was planted... and come up with some $500 or less, and get a new board made to replace the old one at that post.... we will write to the President and PM of India to ask the nation to consciously put signs that are inclusive and reflective of a Pluralistic India. One nation under Tiranga with liberty, justice and inclusion of all.

May be the President of India Association in Dallas, Mr. Hari Patro can take the lead and get it done, our Association has done a lot of great things around and we can hoist one more flag for us, the Dallas Indians Group.

In a message dated 6/14/2007 9:15:52 A.M. Central Daylight Time, baxxx@gmail.com writes:They left our Zoroastrianishm I suppose because of the small numbers of us in India. America is also getting there. Eventualy the rest of the world will also learn to live together, after we all experience enough strife caused by religious fanatics in the name of God.The best Photograph for life time especially for Indians

Thanks for the notes from my Muslim, Zoroastrian and Jewish friends, listed below.

The suggestion? It could be a number of them, one that resonates is as follows, write your own phrase or sentence that reflects the pluralistic heritage of India, example:

You are invited to discuss on the Pluralistic nature of Indian Society. Our goal is to seek ideas and make attempts to move towards solutions to ensure continuance of India's Pluralistic Heritage. The world is one family.

On this forum we ask you to be open to ideas from the fanatics of the divide to the intellectuals. It is the only way we can learn all aspects of an issue. Any long term policy will have to be based on factoring in all expressions. The stability of a civil society depends on how the powerful treat their weak. Mighty empires have come and gone, whereas good governance will last and be remembered.

Multiple ways of worshipping the divine has been a way of life through out our history. Our people have believed that all rivers lead to the ocean. That open mindedness has allowed us all to embrace diverse ideas and expressions with ease. India is proud to have all expressions of divinity from Atheists, Baha’i, Buddhist, Christian, Hindu, Muslim, Jain, Jewish, Sikh to a Zoroastrian.

Hinduism, the land’s oldest practicing faith can sum up one of the purposes of life is to become Brahma. When one becomes Brahma, he belongs to all, and everything belongs to him. A man becomes free from all prejudices and the elements like ignorance, ill-will, malice, anger and desires. That is one’s struggle to get freedom from the bondages and one’s effort to be good to all mankind. That is also the single most important item of faith that Prophet Muhammad taught thru Islam and you will find that essence in every faith.

In a message dated 6/14/2007 9:15:52 A.M. Central Daylight Time, xxramji@gmail.com writes:
They left our Zoroastrianishm I suppose because of the small numbers of us in India. America is also getting there. Eventualy the rest of the world will also learn to live together, after we all experience enough strife caused by religious fanatics in the name of God.
The best Photograph for life time especially for Indians