From Muslims in America, a novel protest against quran burning

Courtesy: Times of IndiaWASHINGTON: In an effort to overturn the image of Muslims as fire-breathing, sword-slashing conquerors and avengers, a Muslim group in America will resort to a pacific response to the provocative burning of the Quran by a fundamentalist Christian evangelist.

Pastor Terry Jones, the notorious Christian extremist who riled Muslims across the world with his inflammatory burning of the quran in 2011, has upped the ante by threatening to burn 3000 copies of the Quran on September 11, the anniversary of the terrorist attack on America that killed nearly 3,000 people. But instead of getting provoked, the so-called " World Muslim Congress" in the US said it will "reclaim the standard of behavior practiced by the prophet concerning scurrilous and hostile criticism of the Quran."

It cited a quranic verse that says, "To overcome evil with good is good, and to resist evil by evil is evil," and said it is also strongly enjoined in the Quran in the same verse 41:34 that "Good and evil deeds are not equal. Repel evil with what is better; then you will see that one who was once your enemy has become your dearest friend." 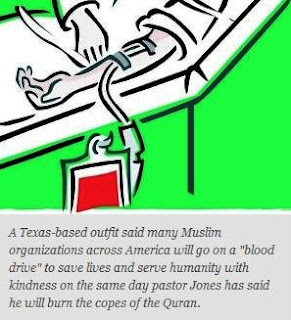 The Texas-based outfit said many Muslim organizations across America will go on a "blood drive" to save lives and serve humanity with kindness on the same day pastor Jones has said he will burn the copes of the Quran.

"As Muslims and citizens we honor the free speech guaranteed in our constitution. We have no intentions to criticize, condemn or oppose pastor Terry Jones' freedom of expression. Instead, we will be donating blood and praying for goodness to permeate in our society," said Mike Ghouse, an Indian-American Muslim community leader who has been promoting inter-faith harmony in the US for several years.

Ghouse said the organization hoped that the blood drive event and the message will remind Muslims elsewhere in the world that violence is not the way. "Muslims, who react violently to senseless provocation, should realize that, violence causes more violence, and besmirches the name of the religion that we hold so dear. We believe that Prophet Muhammad was a mercy to the mankind, and we ought to practice what we believe and preach. We must not insult Islam by the negative reactions of a few," a statement from the organization said.

Jones's Quran burning capers have caused universal revulsion, including in the United States, and also led to sporadic episodes of reactive violence in some countries. US government officials, from the federal, state, and local levels, have repeatedly condemned his antics.

"It's regrettable that a pastor in Gainesville, Florida with a church of no more than fifty people can make this outrageous and distressful, disgraceful plan and get, you know, the world's attention," former US secretary of state Hillary Clinton said when Jones first announced his provocative move in 2010.

But Jones has kept at it despite universal condemnation, including promoting a movie called the "Innocence of Muslims" that vilified Islam and conjuring up September 11 as "International Judge Muhammed Day." Although dismissed as a wingnut in the US, he still gets enough attention to rile up some Islamic extremists. http://timesofindia.indiatimes.com/world/us/From-Muslims-in-America-a-novel-protest-against-quran-burning/articleshow/21982162.cms
Posted by Mike Ghouse at 9:50 PM