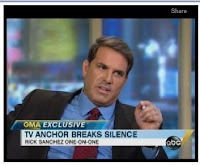 Rick digs into his memory and relates, “When my father and I delivered the furniture to this Rich lady in , I asked her for a glass of water and she told me to go outside and get it from the spigot or the water hose”. It’s amazing what holds people and what motivates them to go and excel. Rick is a decent human being and has the balls to ask tough questions, I hope more Journalists learn from him. No one should nurture anti-Semitic, anti-Islamic or anti-any sentiments to begin with, but if you find yourselves in a unnatural sentiment, fight from within, do you Jihad, the struggle to fight the temptation to slip from righteousness get out of it. Repentance and apology are the best cures and thank God, he did very well in that interview with Stephanopoulos.  http://voices.washingtonpost.com/howard-kurtz/2010/10/rick_sanchez_is_sorry_really.html
In 1982, the Sales manager at the now defunct Centennial homes did not hire me because I had an accent and he did not trust that I would sell the American dream of homeownership to folks walking in that door. It never left my memory and years later not only was I #1 community Sales Manager for Ryland Homes and Drees Homes, but also went on serving as a fellow board member on the Marketing team at the Home Builders Association.
In September, I gave a pre-show talk on the play “Kite runner” by the way no one should miss that show, it is a powerful drama about human aspirations, racism, humility, hope and getting even. In one scene, the bad dude confronts the man he hated when he was a kid and pushes him on the floor and says, “We have old scores to settle” and calls on him to fight like a man. Isn’t it human to bind ourselves with setting scores as well as expressing gratitude.
Way back in 1971, I drafted company letters for Sunder Chemicals in . The owner Mr. Harbans Lal, praised every time, “you are going to become a writer” and I have now written over 300 articles on Pluralism and over 700 pieces on every aspect of Islam and hope to get two books out soon; one on Pluralism and the other one on Islam. Thank God my articles have been published in a large number of international news papers including Washington Post, Austin Statesman and Huffington Post including and oddly Tehran Times, Arab News, Sudanese News Paper and several Asian News papers. I was happy writing all over, but my happiest moment came when I started writing for Dallas Morning News, my home town paper.
Every time some one says a few good words, Harbans Lal comes on vividly with those words echoing in my ears.
The negative comments of that lady turned Sanchez to be someone, to be something and finally it came out. It negates the negative and brings a balance back. Let’s call it Rick Sanchez Syndrome.
Mike Ghouse is a speaker on Pluralism and Islam offering pluralistic solutions to the media and public on issues of the day. His blogs and sites are listed at www.MikeGhouse.net
Posted by Mike Ghouse at 7:43 PM