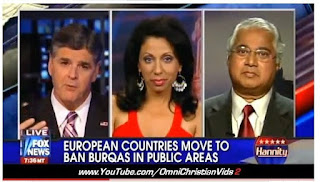 On Hannity Show June 29, 2010
Link on you tube: http://www.youtube.com/watch?v=cnnGQB9tPyg

Mike Ghouse live from Nashville, Tennessee. Of course we could not get all the talking points in to the show, but you can read it.

Let's do some serious critical thinking. French commies now want to tell their people what they eat, believe, pray and WEAR? How dumb!

Don’t the French believe in liberty no more? Didn’t some French philosopher say that, even though I disagree with you, I will stand up for your rights? Where is the Frenchness in France now? They have become radicals; Talibans forces women to wear the Burqa and the French forces women no to wear, who the heck are these militants?

Would Hilary Clinton or Michelle Obama wear mini skirt to the white house? Should we consider them not progressive? If you were a woman, would you wear open cleavage blouses at work place? A few do, just like a few women wear full clothes to their place of worship. You can imagine a range of scenarios, where you will refuse to wear anything that is not comfortable to you, rightly so, particularly if some idiot tells you to, in this case the French Government.

Bridgette, would you wear the bikini on the show if Fox TV tells you? If not, why not? It is the culture, is it not? Is there anything out there in the world that is not cultural? No woman should put with that attitude any more.

Women have been oppressed throughout the ages…be it in America, China, Arabia, India or the Lamas… Afghanistan, Iran or Saudi Arabia

Talibans are bullshitting their oppression and calling it Religion, why the hell are you buying it? Why don’t you buy what Quraan guides equally to both men and women to be modest, and advises women to cover their bosoms and men to wear fuller clothing as well. Over centuries a cultural adaptation has taken several forms of head covering for the modesty and it ranges from Burqa to no Burqa. It is as cultural as what women in America wears to weddings, funerals, church, birthdays and other events.

Let THE WOMAN choose what she eats, believes or wears.

We all need to stand up for the freedom of women, and oppose intolerance in societies like France and oppression like Turkey.

Mike Ghouse is a speaker, thinker, writer, optimist, educator and an activist of Pluralism, Justice, Islam, India, Peace and Civil Societies. He is a conflict mitigater and a goodwill nurturer offering pluralistic solutions on issues of the day and is a frequent guest on the media. Mike's work is reflected at three websites & twenty two Blogs listed at http://www.mikeghouse.net/
Posted by Mike Ghouse at 2:38 PM