Good for nothing Republicans 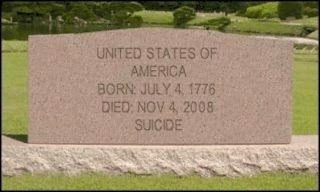 The Good for nothing Republicans

A handful of extremists men among Republicans are making waves because the majority of the good for nothing Republicans are letting it happen in their name. They have everything to loose in 2010 and I hope the good Republicans wake up and distance themselves or get rid of Palin, Limbaugh, Beck and the old Republican leadership who are bestowed with conspiratorial, and war mongering mindset. We are no longer a nation of bigots, we are a nation of good people, who beleive in living and letting others live.

Republicans have to get their shit together and win the Senate majority in 2010 to keep the checks and balances of governance in tact. If not we will have a Bush in Obama, who will become arrogant and make unilateral decisions. Power is corrupting and we the people have the ability to corrupt of our system of fix it.

I am laughing at the following email forwarded from a Republican ‘friend’. They are hanging on to the very ideas that was their down fall; extremism. This Professor may not have written it, however I am writing to him to clarify, if he wrote this. Do these guys think democrats and republicans live in enclaves? Separate Colonies?

Democrats: 13.2 Republicans: 2.1
Professor Olson adds: "In aggregate, the map of the territory Republicans won was mostly the land owned by the taxpaying citizens of the country.

Olson believes the United States is now somewhere between the "complacency and apathy" phase of Professor Tyler's definition of democracy, with some forty percent of the nation's population already having reached the "governmental dependency" phase.

If Congress grants amnesty and citizenship to twenty million criminal invaders called illegal’s and they vote, then we can say goodbye to the USA in fewer than five years.

If you are in favor of this, then by all means, delete this message.

If you are not, then pass this along to help everyone realize just how much is at stake, knowing that apathy is the greatest danger to our freedom.