Thanks Obama for fixing Goofy Biden 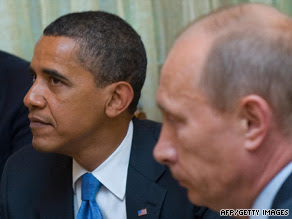 I am proud of you Mr. President for correcting your goofy and uncertain vice-President Biden. He was not cautious but downright dumb to have made that statement - War will drag us down and every one will be worse off, first of all, it will not be good for Israel. The war mongers like Netanyahu and the Republican party leaders (not the party moderate majority but the extremists) do not understand peace. You screw around others, you are going to get screwed too. You cannot have peace when you mess up others, you cannot be secure when you threaten others. - Mike Ghouse

"We have said directly to the Israelis that it is important to try and resolve this in an international setting in a way that does not create major conflict in the Middle East," Obama said, referring to Iran's nuclear ambitions.

Obama has been in Moscow for a summit aimed at trying to reset the U.S.-Russian relationship.
On Sunday, U.S. Vice President Joe Biden appeared to leave the door open for Israel to attack Iran if it saw fit. "Israel can determine for itself -- it's a sovereign nation -- what's in their interest and what they decide to do relative to Iran and anyone else," Biden said on ABC's "This Week."

Obama said Tuesday that Biden had simply been stating a fact, not sending a signal.

"I think Vice President Biden stated a categorical fact, which is we can't dictate to other countries what their security interests are. What is also true is that it is the policy of the United States to resolve the issue of Iran's nuclear capabilities in a peaceful way through diplomatic channels," he said. Watch CNN's Ed Henry interview President Obama »

"The Israelis see Iran achieving a nuclear capability as an existential threat, and that fact is tied to the rhetoric of the leadership of Iran, which ... has said that they would seek to eliminate Israel," said Mullen, the chairman of the Joint Chiefs of Staff.

His counterparts in the Gulf also understand the Israeli stance, whether or not they agree, Mullen said. "That gets back to the criticality ... of solving this before Iran gets a nuclear capability, or that anyone... would take action to strike them. And I think that window is a very narrow window," he said in a speech at the Center for Strategic and International Studies in Washington.

He said he hoped diplomacy would resolve the issue. "I am hopeful that that dialogue is productive. I worry about it a great deal if it's not," Mullen said.

The State Department took a similar line on Monday.

"Our goal here is to prevent Iran from obtaining nuclear weapons. When I say 'our' it is just not the United States -- it is the international community," spokesman Ian Kelly said. "Israel is a sovereign country. We are not going to dictate its actions. We also are committed to Israel's security and we share Israel's deep concerns about Iran's nuclear program."

Asked if this could be interpreted as the United States flashing a green light for Israel to attack Iran's nuclear sites, Kelly said, "I certainly would not want to give a green light to any kind of military action."

The Israeli government considers Iran's nuclear program to be the dominant threat facing the country.