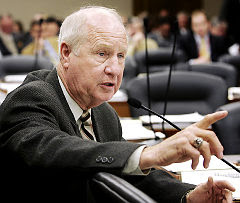 A Republican Senate challenger in Arkansas called Sen. Chuck Schumer "that Jew" at a campaign event and has spent a week backtracking, apologizing, and digging himself in deeper.

This kind of bigotry must be condemned. The senator needs to apologize and promise never to say anything like that ever again. Inclusion is the hallmark of civil societies and we need to let the world know we are a civilized people and a civilized nation. As American Muslims, we condemn this bigotry.