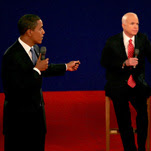 http://mikeghouseforamerica.blogspot.com/2008/10/obama-dialogues-with-mccain.html
..
In the 2nd Presidential debate on Tuesday, October 7th, Obama remained his usual: civil and to the point. He did not attack McCain the person, as McCain did when he pointed towards Obama and said "that one". The media should have grilled McCain on that.

Here are the dialogues, I wish Obama could deliver;

"Senator McCain, you keep parroting "you don't understand" as if that is the only phrase you know, thank you, just tell me if you understand, or even hear what I have said many times and just three minutes ago that " when we find where Bin Laden is holed up and the Pakistani Government is unwilling and does not want to get him, then we will attack the centers where he is, isn’t' that what I said? Senator McCain, you turn around and say that ‘I will attack Pakistan. Do you really hear things out ? Is that how you make you judgments?’

Didn't Lieberman correct you on Camera that Iran was not training Al-Qaeda, and then you corrected yourselves right on the CNN camera?" Senator McCain do you understand, what you utter?

"Do you want me to give you the list, or two items are enough for you to know to back off. I hope you get this ‘it is you who do not hear, let alone understand.’”

“Senator McCain, you are the one who wants your government to buy houses and you have gall to call that 'he wants bigger a government?" Do you understand what you are saying?

“Senator McCain, let’s focus on topics and what we need to do to create societies of co-existence, when you talk about creating a club of democracies, you are dividing the nations into two groups, let’s strengthen United Nations, where the entire community of Nations can dialogue. Please don’t continue Bushing, “you are either with us” and bring disaster to our economy and our nation”. Do you understand that? The Americans understand that and they don't want four more years of Bush around you.

Personally, I know Obama would stick to the point and I admire that. But to those gossiping Republicans who like lines like that, he should deliver. Because Republicans are not looking for anything of substance, they don't even get it that American Public is not with their wars, with their threats, with their budget deficit, bonuses to the criminals and with their loot in the name of deregulation. McCain does not understand any of that.

Mike Ghouse is a Speaker, Thinker and a Writer. His comments, news analysis and columns can be found on the Websites and Blogs listed at his personal website http://www.mikeghouse.net/. Mike is a Dallasite for nearly three decades and Carrollton is his home town. He can be reached at mailto:MikeGhouse@gmail.com
Posted by Mike Ghouse at 4:34 PM