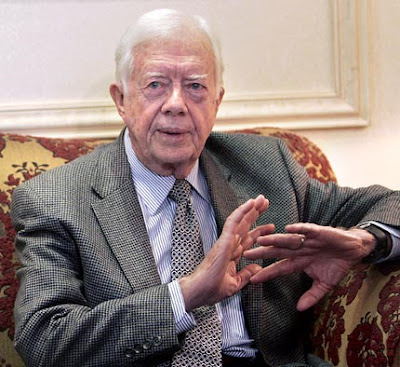 Why can't the US listen to its wiser statesmen? Why do we have to stand against the world and make enemies instead of friends?

The Bush and Olmert adminstrations continue with their thoughtless dirty games. They want to talk about peace, but not with the party who the peace is going to affect? That is downright chicanery.

The acts of both these administrations are not reflective of majority of their population. The few extremists are shoving it down the throats of the people.

I wrote a similar note way back in November, prior to the Annapolis conference. http://peace-palestine-israel.blogspot.com/2007/11/peace-in-israel-palestine.html
# # # # #

Jimmy Carter Was Right to Meet with Hamas

By Joshua Holland, AlterNet
Posted on April 21, 2008, Printed on April 22, 2008
http://www.alternet.org/story/82936/
Former President Jimmy Carter, who won a Nobel Peace Prize for what the prize committee described as his "untiring effort to find peaceful solutions to international conflicts," is touring the Middle East, as a private citizen, in a bid to revive interest in a moribund peace process between Israel and the Palestinians. He's doing so at a time when their decades-long conflict is growing in intensity and distrust on both sides is running high.

As a result, Carter is once again under fire from conservatives. Last week, Republican Rep. Sue Myrick (NC) went so far as to call for the former president's passport to be revoked on Fox News.

Carter's crime was to sit-down with leaders of Hamas last week to explore the possibility of waging peace in the Middle East. For many Israel-hawks, it wasn't a first offense; Carter is guilty of viewing the Palestinians as human beings and for condemning human rights abuses on both sides of the conflict between Israelis and Palestinians. "Any side that kills innocent people is guilty of terrorism," he told an audience at Cairo's American University after his sit-down with members of Hamas.

Carter rejects the short-sighted idea that negotiating with one's enemies legitimizes or rewards them for their actions. According to the same logic, when a police department sends a hostage negotiator to talk down a gun-toting lunatic who's barricaded himself in a house somewhere, that department would be guilty of "legitimizing" armed lunatics. It's a ludicrous idea on its face, but one that's essentially embraced by much of the American foreign policy establishment when it comes to the international arena.

It's an ideological construct that defies both common sense and the "best practices" that have been developed in the field of conflict resolution -- best practices that were borne of hard experience. What Carter seems to understand, and his detractors appear unable to grasp, is that there is absolutely no chance of establishing and implementing a peace agreement between the Israelis and Palestinians without offering Hamas a seat at the negotiating table.

One of the most obvious lessons from the international community's efforts at conflict resolution is that getting signatures on a peace deal is only half the battle (if that much). Implementing peace treaties is much more difficult, and recent history is littered with wreckage of agreements that didn't hold.

One of the ways to almost guarantee that a peace agreement will be impossible to implement is to negotiate it without bringing all of the combatants to the table. Israel and Fatah (the faction of Mahmoud Abbas, Chairman of the Palestinian Authority) can negotiate a deal, but if Hamas isn't invested in it, then they'll have no incentive to comply with its terms.

One doesn't need to have warm feelings towards Hamas to recognize this reality. The idea that one can choose one's negotiating partner, as opposed to negotiating with all of the parties to a conflict, is a fantasy. The fact that Hamas won a decisive victory in the 2006 Palestinian elections and is the legitimate voice of a majority of the Palestinian people reduces the notion to a bit of right-wing idealism that's thoroughly divorced from historic experience.

Carter, whose recent book Palestine: Peace not Apartheidbrokered a lasting peace deal between Israel and an Arab state. His work at Camp David in the 1970s not only led to a sustainable peace deal between Israel and Egypt, it set a precedent that was followed by other Arab states and eventually an offer by all of the Arab states for full recognition of Israeli sovereignty in exchange for Israel's return to its pre-1967 borders. In other words, not only has Carter contributed to the region's stability, he's also done more to improve Israel's security than all of his neoconservative naysayers combined. ruffled many right-wing feathers, remains the only American president to have actually

A common refrain among American and Israeli hawks is that Hamas must recognize Israel's legitimacy before they can get a seat at the table. While that sounds reasonable on its face, in reality it's asking Hamas to accept a key Israeli demand before negotiations begin. Meanwhile, Israel continues to build new settlements in the Occupied Territories, and continues its brutal siege of the Gaza strip. In other words, the position held by much of the Washington establishment is that Palestinians must make concessions before negotiations begin, but Israel is free to continue creating "facts on the ground," even when it's in violation of international law. It's a pipedream to believe such a position can lead to anything more than extended bloodshed.

Of course, what separates Carter from his detractors may be that he has a genuine desire for establishing peace in the Middle East, while many "pro-Israel" hawks favor (an impossible) military solution to the conflict, with Israel crushing the Palestinians into oblivion.

If that is their position, they should be upfront about it and admit that they oppose a negotiated settlement to the conflict rather than lashing out blindly at anyone who is serious about making peace.